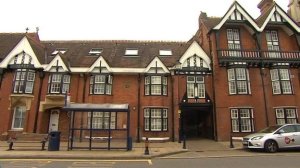 A 77-year-old man from Norfolk has been arrested on suspicion of historical physical and sexual abuse after complaints about staff at a former Catholic boys’ home in Bedfordshire.

The man, from Thetford, was interviewed and bailed at part of an investigation into Shefford St Francis Boys Home.

The home, which was run by the Northampton diocese of the Catholic church, closed in the mid 1970s.

In May Bedfordshire Police revealed an investigation had started into abuse allegations at the home dating back to the 1950s and 1960s.

But last month police said the case had been closed as officers had been unable to find anyone alive to prosecute.

Earlier this month the BBC revealed detectives had received new information from an ex-resident.

Many of the residents have alleged they were abused by priest Fr John Ryan, who ran the home in the 1960s and died in 2008

The BBC has talked to former residents of the home who allege they were physically and/or sexually abused at the orphanage.

At the start of November, police said officers had investigated abuse allegations made by 28 ex-residents but had decided to close the case.

Police said the suspects included one priest (believed to be Father John Ryan, who ran the home in the 1960s), and four nuns, who “were found to have died”, and two other suspects who could not be located.

Following the closure of the case the BBC sought more information on the investigation but this was refused on the grounds that “further evidence has come to light”.

The Northampton Diocese of the Catholic Church, which ran the home, has said it “deeply regretted” any hurt caused, but has stressed the “claims are not proven”.

Many of the residents have alleged they were abused by priest Fr John Ryan, who ran the home in the 1960s and died in 2008

The senior investigator looking into claims of physical and sexual abuse at a former Catholic orphanage says a new suspect has been identified.

Retired detective chief inspector Mark Ross has been brought back to head up an inquiry into abuse at the St Francis Boys Home in Shefford, Bedfordshire.

Mr Ross said 80 “potential victims” had been identified and 35 statements taken in a worldwide investigation.

“Each week, we are identifying more victims,” said Mr Ross.

“If they are still alive they should be brought to justice. These victims have been battling for justice for years.

“We have found another suspect and are making inquiries as to whether this person is alive.

“Victims we have already been in contact with are in Australia and America and we have been taking statements.

“We have assigned two of our team to go to Europe to talk to a UK citizen about the potential suspect.”

He added: “Obviously we are dealing with some horrendous cases. Certainly both the physical and sexual abuse has been quite horrendous.

“What happened to them as youngsters has affected their entire lives. Some have been incapable of having relationships because of the abuse.”

Mr Ross, who spent 30 years in the force before his retirement, said he was “pleased and honoured” to be leading the inquiry.

The BBC has spoken to former residents of the home who allege they were physically and/or sexually abused at the orphanage, run by the Roman Catholic Diocese of Northampton.

Many have said they were abused by priest Father John Ryan, who ran the home in the 1960s and died in 2008.

The Diocese of Northampton has said it “deeply regrets” any hurt caused but stressed the “claims are not proven”.

Three ex-residents of a Catholic orphanage have spoken out about their “brutal” treatment at the hands of a priest, who is at the centre of a police investigation.

The men were residents at St Francis Boys Home, in Shefford, near Bedford, in the 1950s and 1960s.

The three allege physical abuse by Father John Ryan, who died in 2008.

The Catholic Church says it “deeply regrets” any hurt caused, but stresses the “claims are not proven”.

The home, which closed in 1974, was run by the Catholic Diocese of Northampton.

The three men talked to the BBC after it was revealed that Bedfordshire Police are investigating an allegation of sexual abuse against Fr Ryan.

The three were not sexually abused, but allege they were physically abused and are looking at taking legal action against the Church.

David Cox, 61, from Ipswich, who attended the home in the 1960s, said the memories of the beatings at the home “were still very raw”.

“Father John Ryan was the most brutal man I’ve ever come across in my life. He threw kids around like they were toys. We were all punch bags.

“We were caned and punched and slapped, and you’d see blood,” he said.

“The Catholic Church is in denial. The Church has to acknowledge what went on. They must stand up and say, ‘yes, we were wrong, we have let you down and we are really sorry’,” said Mr Cox.

Sidney Hibbitt, 64, of Biggleswade, Bedfordshire, said he “hated” his time at the orphanage, which he attended in the mid 1950s.

He said as well as regular physical abuse, some boys were also sexually assaulted.

“I was in the second bedroom along from Father Ryan’s room, and the boy in the bed nearest the room would not be in his bed if I woke up in the night,” he said.

“I break down when I talk about it. It makes me feel so bad now as it did then, so many years ago,” he added.

Bernie Gargan, 66, of Peterborough, who attended the home in the 1950s, said: “We were completely battered by the priests.

“You were stripped naked to be caned.”

He said he thought the Church needed to “come clean” over the abuse.

Bedfordshire Police said: “We have received a complaint concerning St Francis Boys Home and are in the early stages of an investigation.”

A diocesan spokesman said: “Father Ryan died several years ago, but the police are investigating the claims that are being made.

“The Catholic Church deeply regrets any physical or emotional hurt that may have been caused, but the claims are not proven, and it would be inappropriate for us to enter a discussion while the case is under investigation.”

A group of former residents of the home is arranging a reunion in London on 22 June when they hope to discuss possible legal action.

An ex-resident of a Catholic orphanage in Bedfordshire has spoken for the first time about being sexually abused by a priest 60 years ago.

A group of former residents of the St Francis Boys Home in Shefford are taking legal action against the Church.

Most allegations are against Father John Ryan who died in 2008, but the latest claim relates to another, also deceased priest and dates back to 1952.

The ex-resident only felt able to tell his family about the abuse this year.

He told the BBC: “I was 10 years old when I went to the home. One day the priest said he wanted to see me in his room to make the bed.

“So I went up to the bed and he sexually abused me, and did this again and again over a period of months. It was pretty traumatic.”

The former resident, who cannot be named for legal reasons, said he was “disgusted” the Church had not apologised to the children abused at the home and that he would be contacting the police and offering to take part in the group action.

“The Church needs to be made accountable to all the lives it has ruined,” he said.

A new investigation was started this year after allegations of sexual abuse in the 1950s and 1960s at the home run by the Roman Catholic Diocese of Northampton.

The man’s brother, who also went to the home, said: “My brother was abused maybe 12 times. All he can remember is the priest’s hairy chest, he then blanked out.

“I think the most important thing is that it comes out into the open, so people can see what really happened.”

A spokesman for the Northampton Diocese of the Catholic Church, which ran the home, said it “deeply regrets” any hurt caused, but stressed the “claims are not proven”.