Reflecting on the human cost of abuse and its prevention By Archbishop Charles J. Chaput, O.F.M. Cap.

Reflecting on the human cost of abuse and its prevention

EDITORS NOTE: In July 2012 when Archbishop Chaput’s investigation cleared one accused priest, SNAP reacted with sharp criticism of Chaput’s procedure, saying decisions were “held in secrecy for months or weeks until the archbishop and his public relations staffers deem it’s most advantageous to disclose them. Chaput continues to act recklessly and selfishly … with little or no regard for children’s safety.” At the same time, SNAP also called “again” on Archbishop Chaput to proceed to defrock Lynn after his conviction; and for “eliminating Pennsylvania’s archaic, arbitrary, predator-friendly statutes of limitations”. In January 2014, the archdiocese, prominently defended by Chaput, posted bail for Lynn. In April 2015 the state supreme court upheld the initial conviction and revoked Lynn’s bail. He was returned to serve the balance of his 3-to-6 year term. PLEASE read the Editors Notes following the end of the story.

The hypocrisy of Archbishop Charles J. Chaput in the following story is incredibly revealing.

Throughout the weeks of April, our Commonwealth, along with the rest of the country, has been focused on National Child Abuse Prevention and Awareness Month.

Here in Pennsylvania, our people have come through a very difficult decade on this issue. But the abuse problem is much wider than any one state, profession or demographic group. It cuts through every level of society. Child abuse is an ugly crime; abusing children sexually compounds the evil. Every year we see many thousands of cases of child sexual abuse across the country in a full range of institutions, public and private, religious and secular.

In response, Pennsylvania legislators have passed 20 new laws aimed at preventing child abuse and providing better support for survivors. In doing so, they’ve offered a model for the nation. We owe them our gratitude for their good work. And it’s important to stress that as a Catholic community, we too are committed — just as everyone should be — to ensuring safe environments for children and young people.

The Archdiocese of Philadelphia has a zero tolerance policy for clergy, lay employees and volunteers who engage in sexual misconduct with children. If an accusation of this nature is made, we take immediate action by reporting the matter to law enforcement and cooperating with authorities fully in the course of their work.

We’re committed to educating all those who work with children, as well as the children in our schools and parish religious education programs, so they can recognize signs of abuse and make a report.

As we come to the end of April, it’s worth highlighting some key archdiocesan statistics:

* More than 280 designated Safe Environment Coordinators are now working in our parishes, schools and youth ministries to ensure compliance with state laws and archdiocesan safety policies.
* More than 92,000 adults have received training to recognize, respond and report child abuse since 2003.
* Nearly 30,000 adults have received mandatory reporter training.
* More than 100,000 children have received age-appropriate abuse prevention education.
* The archdiocese has invested more than $2.4 million in education and training aimed at preventing and reporting sexual abuse since 2006.

In addition, the archdiocesan Victim Assistance Program offers compassionate and substantial assistance to individuals and families every year. During the 2013-14 fiscal year alone, the Church in Philadelphia dedicated more than $1.6 million to various modes of assistance including counseling, medication, and vocational support for survivors and their families.

To put it simply: The Philadelphia Catholic community is, and will remain, fully committed to helping survivors of childhood sexual abuse and their families heal, no matter who committed the crime against them or when the crime occurred.

Evil actions in the past can’t be erased and shouldn’t be forgotten. Over the decades sexual abuse has wounded hundreds of innocent lives, both within and outside the Church in Pennsylvania. But the sins of the past need not determine the present or future.

The Catholic Church in the Greater Philadelphia region is dedicated to protecting our young people and families from sexual predators and the suffering they cause — now and always.

EDITORS NOTE: The Archdiocese of Philadelphia did NOT dedicate itself to protecting young people from sexual predators, nor did they do anything about the suffering of the victims. This is extremely well documented.

Cardinals John Krol and Anthony Bevilacqua covered up for their pedophile priests.

Bishop Joseph Cistone also participated in the cover ups, including silencing a nun who tried to alert parishioners at St. Gabriels parish of an abusive priest. Cistone also covered up for other priests and showed himself he was more concerned with the public relations than the sexual abuse of children.

Bishop William Lynn, who was eventually convicted in his part for covering up for “Father” James J. Brennan among others. “According to a scathing grand jury report, Lynn, as secretary of clergy for the archdiocese, concealed the crimes of accused priests and put them in positions in which they could harm more children.

Lynn figured prominently in a scathing 2005 grand jury report that found 63 priests in the archdiocese had been credibly accused of child sexual assault over several decades while local church officials turned a blind eye..

Some of the pedophile priests they covered up for were:

2. “Father” Edward Avery, 69, known for his moonlighting work as a disc jockey, pleaded guilty to involuntary deviate sexual intercourse and conspiracy to endanger the welfare of a child. He was immediately sentenced to 2½ to five years in prison. The charges stem from Avery’s abuse of an altar boy at St. Jerome’s Parish in northeast Pennsylvania in 1999, when Avery was 57 and the boy 10.  Avery was at St. Jerome’s despite a credible 1992 complaint that led him to undergo psychological testing at an archdiocesan-run psychiatric hospital, according to a 2005 grand jury report. He was pulled from his parish, put on a so-called “health leave” and then reassigned in 1993, the report said.” 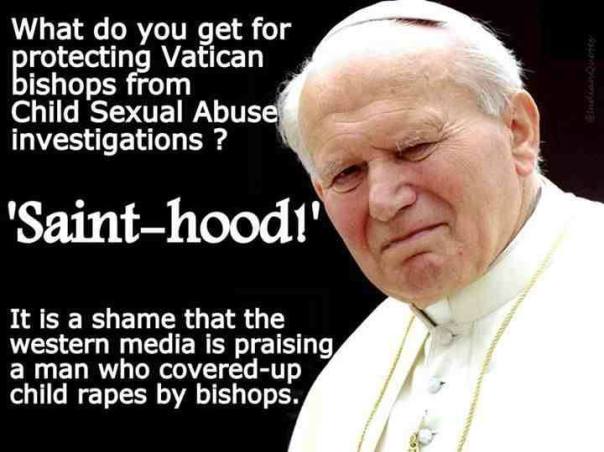 The world is not ignorant about the presence of lecherous priests in the world but, who would have guessed that the Catholic Church also hosts a few of these perverts of the highest order. Among the most serious cases are the ones involving Cardinal Hans Hermann Groer an Austrian friend of the Pope. The Cardinal was accused of molesting over 2000 boys and young monks in his overall career span. Even then he sailed through the situation because there were no sanctions placed on him.

The next case was related to Marcial Maciel Degollado, the Mexican founder of the ‘Legion of Christ’. This person was accused of not only molesting young boys but fathering a number of children through innumerable women. The reason why Pope John Paul II was disapproved was for obstructing investigation in both these cases. In fact he had been criticized for promoting those individuals who had sex abuse cases pending against them.

Covering up of these cases have been considered to be worse than the crime itself. Cardinal Ratzinger under the auspices of Pope John Paul II had written a letter stating that all sex abuse cases in the Catholic Church be sent to his department and be subject to pontifical secrecy. He had also tried to persuade the Pope to bring them to book, but his opponents in the Vatican managed to block any further enquiry into the issue. In the words of the Present Pope Benedict XVI, ‘the other side had won’.

When the child abuse cases in the Catholic Church had first come to light, the Pope had an acceptable ‘bad apple’ explanation to provide. He said that even as priests some brothers are afflicted by sins that betray the grace of ordination. It is because of these few bad cases that the other brothers, who are conducting their office in the most virtuous manner, with honesty and integrity which sometimes result in heroic self sacrifice, are also tarnished. Although he showed his concern and sympathy to the victims and their families, he called upon the rest to embrace the ‘mysterium crucis’ and commit more fully to the search of holiness.

While H.H Groer was removed as Arch Bishop of Vienna in 1995, Pope Benedict finally managed to oust Maciel in 2006. Further investigations have proved that Maciel had sent pots of money to buy support in the Vatican.

One can give many reasons as to why Pope John Paul II had brushed all this rubbish under the Vatican carpet. It may be that he did not want the people in general to loose their faith on the Church, or it could also be that he believed that some (not all) of these cases were made to frame people in high Vatican offices. Whatever the excuse may be, people will question him for not dealing with these perverts in strict hands. History will show that it was actually Pope Benedict XVI and not Pope John Paul II who had initiated ‘purification’ of the Church.

‘Beautifully crafted’ 24” bronze statues of Pope John Paul II give out an aura of peace and tranquility. This collector’s item is also considered a very thoughtful gift for loved ones’

I have taken a bit of vacation from posting