Celibacy and child abuse: why is the Catholic church pre-empting the royal commission?

Celibacy and child abuse: why is the Catholic church pre-empting the royal commission?

It’s a mistake for the Catholic church to get into debates about its folk devils. It should let the royal commission lead on the question of celibacy and child abuse

The representative of the Australian Catholic church to the royal commission into child abuse has claimed that “obligatory celibacy may also have contributed to [child] abuse in some circumstances”.

In their 2014 activity report the Truth Justice and Healing Council also recommended that priests undergo “Ongoing training and development, including psycho-sexual development”.

This has been leapt upon as an admission that the church’s regime of sexual discipline for clergy is broken at best, and at worst, is a factor in producing paedophiles.

“By publicly acknowledging the potential role of celibacy in this way, the report sets an international precedent,” The Australian’s Dan Box reported.

It’s not quite as simple as that. The council’s Francis Sullivan told Guardian Australia that their statement on celibacy – one highly-qualified line in the whole report – was “not research that we’ve done that we’ve now come to an opinion on”.

It was merely the council noting that celibacy had been raised by witnesses and victims at the commission, and by the commissioners themselves.

“If we hadn’t alluded to the potential influence of celibacy in an activity report, we would have been criticised for the glaring obvious – in some people’s eyes,” he said.

“More work needs to be done to substantiate the claim”.

He also acknowledged that many priests might struggle to keep their vow and will need assistance. Obviously a breakdown in celibacy doesn’t always mean abuse. Priests in relationships – some which result in children, then kept secret – are no uncommon occurrence.

Celibacy, Sullivan says, is an important issue for the church to deal with. 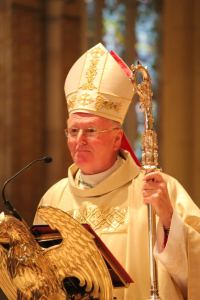 Nevertheless, Box’s story “took off like a fire in dry grass”.

The inclusion of the celibacy line in their activity report is, in my view, a mistake on the part of the council. The royal commission itself has not reported on the issue, except to record some victims’ opinions in an appendix to their interim report.

Sullivan thinks this is “neither here nor there” but the hard work of collating the best academic research on the pathologies of abuse is still being done.

To go out in front of the commission and “put celibacy on the table”, as the council has done, has pre-empted the commission’s own findings into the issue. Sullivan knows it’s among the most contentious and politically sensitive issues in the child abuse debate.

He also acknowledged that “it’s an extraordinarily minor element of the report”, compared to broader discussions of closed clerical culture, obedience, professional standards and the like.

Everyone has an opinion on whether celibacy contributes to clergy-perpetrated child sexual abuse: theologians, clergy, journalists, academics, and the victims themselves. Often views on celibacy are a way of leading into a speaker’s politics regarding the church more broadly, and should accordingly be treated with scepticism.

None of this is to say that celibacy doesn’t lead to abuse. Perhaps it does. But our best hope is for the commission’s researchers and experts to go through the leading academic research and the evidence of those who survived abuse, and to come to the most rigorous conclusion possible.

When I put to him that the council would prefer to talk about celibacy than more substantive issues of justice, Sullivan disagreed. It’s not an attempt “to get a conversation going about the dreaded perpetrators and not the systemic problems in the Catholic church”.

If it’s not a strategy, then it’s an oversight – one that will further contribute to the “trust deficit” Sullivan acknowledges is a feature of church life he “fronts every day”. It raises suspicion of celibate clergy in a way that implies causation when the commission itself has not come to that conclusion.

The ultimate purpose of the various inquiries into child abuse will be to inform a post-commission settlement, and the report deals extensively with what the Catholic church’s contribution to that settlement will look like.

Every time the church buys into discussions about the folk devils of celibacy and the seal of the confessional, making them first-order issues before the evidence says they’re first-order issues, the much more important question is obscured. Namely, what financial and legal mechanisms must be established to secure justice for victims?

The appearances of Cardinal George Pell and others at the commission this year were a disgrace. Catholic clergy continue to be evasive, rude, dishonest and callous in the witness box. Now that Pell has departed for Rome, there is some clear air to talk about justice.

Sullivan’s council is making an effort to engage constructively in this project. But who’s listening? The council has submitted to the inquiry at every stage and on every issue – something state governments and other organisations haven’t done.

Unless we have no faith in the commission’s processes at all, relentless cynicism of the church and Sullivan’s council is increasingly becoming an ungenerous and unproductive stance to take.

What is the church actually putting forward at this stage, beyond the celibacy question? The report proposes that organisations at fault pay into a national redress scheme, with a levy on public liability insurance to compensate victims of organisations that no longer exist. Payments from the scheme would be capped – one of the criticisms of the failed Catholic church victims’ scheme, Towards Healing.

Any cap would take place “in line with community standards”. I would imagine most members of the community would struggle to agree on what the upper limit should be. Determining one will be largely out of the church’s hands anyway.

Is their proposed scheme the best possible option, or is it a second-rate compromise designed to head off a full-blown raid of clergy abuse survivors on the church’s finances? Parishes in the US are already going bankrupt under the weight of child abuse payouts. A state-by-state statutory redefinition of vicarious liability laws, to make the church responsible for clergy abuse even where no negligence has occurred, is the gold standard. This, and a loosening of the statute of limitations for abuse and the like, could be financially disastrous for the church.

Sullivan denies that the church pursues “what might appear to be prima facie a popular policy” at the expense of a more far-reaching response like this.

But it’s hard to avoid the comments of leading Catholic lawyer Fr Frank Brennan, who has raised the spectre of a legal challenge if any future redefinition of vicarious liability goes ahead: “Ultimately, this will be a matter for the High Court, and not for [commissioner] Justice McClellan.”

It’s also hard to discount that Sullivan’s official position on vicarious liability and other associated issues is to “leave it for the courts”. This could amount to a death sentence for any state-by-state statutory scheme if the high court rules conservatively. That would be a waste of large amounts of political capital, effort and goodwill.

In any case, the commission, as the first rigorous state-run inquiry into institutional abuse in the world, has a duty to get it right. Sullivan and his council are under intense scrutiny, but nonetheless have pledged to contribute constructively to the commission’s work.

“[T]he Catholic Church needs to be more proactive, more on the front foot, more unashamedly committed to truth, justice, transparency and compassion, regardless of what the royal commission might recommend,” Brennan wrote after the release of the commission’s interim report.

Perhaps this is the case. But given the commission is a more rigorous and independent body than the church, it would be best to let it rule on the most contentious issues first.

TWO priests are under investigation by church authorities both in Australia and the UK amid allegations they sexually abused at least two boys in the 1960s and 1980s.

News Limited can reveal one of the priests, Father Gordon Bennett, died in 2011 but not before the church had been told the priest, who was sent to Australia in September 1985, was being accused of child sex offences.

The victim, who asked not to be named, had been writing to the church in the UK and later Australia with his claims for more than five years prior to Fr Bennett dying at the age of 90.

The victim, now aged in his 60s, last month retained legal counsel and is to pursue a claim of damages against the Catholic Church in Australia or in London where last Friday the UK’s highest court ruled clerics were akin to being “employees” of the church and thus diocese are liable.

The victim was a teenage altar boy when he was allegedly abused in the UK but later moved to Australia only to discover his former alleged abuser was working in the Perth diocese.

In a second unrelated case, a Queensland man now aged in his 40s is also seeking legal redress after being allegedly abused by Jesuit priest Father James Chaning-Pearce who in 1997 pleaded guilty and was jailed in England for three years for abusing another three boys aged 12, 13 and 15.

The Australian man was allegedly abused in the mid-1980s in Zimbabwe – where his parents had been posted – and he met the priest who was working at a school.

He approached authorities including the police in the UK after he realised the man who had allegedly abused him was back working at a prestigious Catholic boys’ college in the UK.

It was his information that then sparked the police probe which led to Chaning-Pearce’s prosecution for the UK abuse.It is understood the priest, having served his time, is now at a monastery in Wales. No charges have been brought against him in relation to these latest allegations.

Legal sources close to both investigations said material gathered so far including letters written to the church authorities would be made available to the landmark royal commission announced by Prime Minister Julia Gillard last November.

The commission, with its wide-ranging powers, was created after NSW police claimed the Catholic Church covered up evidence of pedophile priests.

Since then the church has created the Truth, Justice and Healing Council to work with the commission on claims.

Truth, Justice and Healing Council CEO Francis Sullivan said yesterday his group would look at the latest claims and was committed in supplying whatever evidence to get the truth out.

“The suffering of victims and those damaged from the abuse scandals remains the number one issue to be addressed and that our church, like other institutions, must keep up with best practice process to protect children and prevent any sexual or other abuse,” he said.