The alleged abuse spanned four decades, one teenage boy after another. 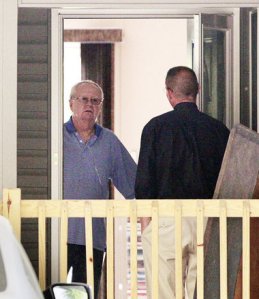 The Rev. Terence McAlinden, left, admitted under oath in a deposition that he routinely slept nude with teenage boys. He declined to comment on sexual abuse allegations when a reporter knocked on his door last year.Ed Murray/The Star-Ledger

The Rev. Terence McAlinden, the alleged victims said, used alcohol, threats and the name of God to coerce them into sexual situations. Years later, in a videotaped deposition, the former youth leader admitted sleeping nude with boys and bathing with them naked in a hot tub.

Today, those boys — now grown men in their 40s, 50s and 60s — said a painful chapter of their lives had closed after learning that McAlinden, 74, was dead.

Suspended from ministry by the Diocese of Trenton since 2007, McAlinden died Friday at a hospital, his sister said. The priest’s accusers said they were told he had suffered a heart attack.

The sister, Pat Brzusek of Bellevue, Wash., said she did not know the cause of death but learned recently her brother, a resident of Little Egg Harbor, was undergoing treatment for lung cancer.

“If there is truly a judgment day, my brother has faced his,” said Brzusek, who has been estranged from McAlinden for many years. “It’s a very sad situation.”

Chris Naples, who received a $610,000 settlement from the diocese last year over claims that McAlinden molested him for a decade in the 1980s and 1990s, said a relative told him the priest’s death was announced during Mass Sunday at St. Theresa Roman Catholic Church in Little Egg Harbor, where McAlinden once served as pastor.

A spokeswoman for the Trenton Diocese said that, before his death, McAlinden requested he not receive a funeral Mass and that no obituary be published. Details about his death were not released.

McAlinden is accused of sexually abusing a boy as early as 1968, when he was a new priest at Our Lady Of Victories Church in Sayreville. It was there that Bob Markulic, now 60 and living in Warren County, said the priest preyed on him for a year. Markulic reached an undisclosed settlement with the Trenton Diocese in 2012.

“We’ve closed the book on him now, and he won’t be able to hurt anybody anymore,” Markulic said. “That’s important, especially to the survivors.”

Markulic and Naples are among four people who have publicly accused McAlinden of abuse. Naples said several other men have contacted the Trenton Diocese in recent years with similar claims but did not want to go public. The diocese has declined to comment on additional alleged victims.

In a deposition, McAlinden acknowledged a sexual relationship with Naples but claimed it did not begin until Naples was 18. He declined to comment on other allegations when a Star-Ledger reporter knocked on his door last year. He was never criminally charged.

Patrick Newcombe, 50, who now lives in North Carolina, told the diocese in 1989 that McAlinden had sexually abused him. Three years later, he reached a settlement with the church. As a condition of the agreement, he was required to remain silent about it, he said

McAlinden, meanwhile, was permitted to remain in ministry.

It wasn’t until Naples came forward in 2007 that the diocese suspended him. At the time, a review board investigated Naples’ claims and found them to be credible.

The fourth man, John Tominus, 48, now of Seminole, Fla., reached a $180,000 settlement with the diocese in October of last year.

Tominus contends McAlinden molested him for three years in the 1980s, when the priest was living in Keyport at Jerramiah House, the headquarters for the Trenton Diocese’s Catholic Youth Organization. McAlinden served as the group’s director. Tominus attended a nearby church, St. Joseph’s Parish.

The other alleged victims said they remained bitter that McAlinden had not been removed from the priesthood, or laicized, and they said they hoped he would not be buried in his religious vestments.

“If that happened,” Newcombe said, “it would be a disgrace.”

Thomas Shoback, 66, convicted on nine counts and could face essentially a life sentence.

A Diocese of Scranton priest who was once assigned to several parishes in Luzerne County, including a Catholic high school, has been convicted of sexually assaulting an altar boy.

Diocese officials on Wednesday confirmed that the Rev. Thomas Shoback, 66, of Wilkes-Barre, was convicted Tuesday in Tioga County Court of Common Pleas on nine of the 32 counts with which he had been charged. Most of those counts exceeded the statute of limitations. Still, he reportedly could face essentially a life sentence.

State police had said the assaults took place from 1991 through 1997 when the boy was 11 to 17 years old, while Shoback was assigned at St. Mary’s Parish in Blossburg, Tioga County.

The diocese suspended Shoback in November 2011 when the allegations of sexual misconduct surfaced.

Diocese spokesman William Genello said the diocese has cooperated with the investigation and prosecution of the criminal case since then.

After receiving the allegations, diocese officials notified the Tioga County District Attorney’s Office, reported the incidents to the Child Line and Abuse Registry operated by the state Department of Public Welfare, removed Shoback from ministry and suspended his faculties to exercise priestly ministries within the diocese, Genello said.

“Now that the criminal justice system has brought this case to closure, the Diocese of Scranton recognizes that the announcement of this verdict will serve as a very painful reminder of the wounds many survivors carry with them, most especially those who were harmed by Father Shoback,” the diocese said in a prepared statement.

Responding to the verdict, Scranton Bishop Joseph C. Bambera said: “At this time, I express my personal sorrow for the pain endured by those who suffered this abuse and extend my apology for any way in which the Church, and particularly its bishops, priests and deacons have failed them.”

He also reaffirmed a personal commitment to exercise vigilance in the protection of children and young people and thanked all who worked diligently to resolve the case.

With the civil law process completed, in accordance with The Charter for the Protection of Children and Young People, Shoback is permanently removed from ecclesiastical ministry and his status as a priest will be referred to the Holy See in Rome for a final determination, Bambera said.

“While Church law has been and will continue to be exercised with regard to this situation, anyone who believes that they have been the victim of child sexual abuse is encouraged to contact law enforcement,” Bambera said. He asked the faithful to pray for the victims of abuse and all seeking healing, reconciliation and peace.

The diocese said Shoback was ordained in 1977 and served as pastor of St. Mary and St. Andrew Parish in Blossburg from February 1989 until July 1997.

According to The Times Leader archives, Shoback’s brother, Edward J. Shoback, a former Diocese of Scranton priest who worked for more than 20 years at Luzerne County parishes and schools, was suspended in 2004 amid similar allegations of sexual abuse.

Edward Shoback reportedly admitted to those allegations and was defrocked by the Vatican in 2009.