Pa. priest caught having sex in car with teen is going to jail

Pa. priest caught having sex in car with teen is going to jail

The Rev. W. Jeffery Paulish will spend 8 to 23 months behind bars. He pleaded guilty to felony corruption of a minor. 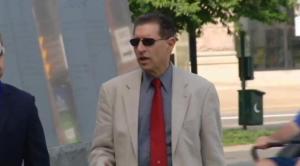 Disgraced priest W. Jeffrey Paulish pleaded guilty to one count of felony corruption of a minor and will serve at least 8 months in jail.

A northeastern Pennsylvania priest who was caught having sex with a 15-year-old boy in a parked car is going to prison.

A judge in Lackawanna County on Tuesday sentenced the Rev. W. Jeffery Paulish to spend eight to 23 months behind bars.

The 57-year-old priest pleaded guilty in January to one count of felony corruption of minors.

Paulish was an assistant pastor at Prince of Peace Parish in Old Forge.

Police said he was spotted by police in a parked car with the partially undressed teenage boy.

The Scranton Diocese suspended Paulish from his duties. He apologized in court Tuesday to the diocese, his friends and family, and the victim.