A rep for Senate Majority Leader John Flanagan says the pol is not delaying the bill because of his ties to the law firm. (BARRY WILLIAMS/FOR NEW YORK DAILY NEWS)

ALBANY — Maybe that’s why state Senate Majority Leader John Flanagan is more concerned about the rights of the predators than justice for victims.

Flanagan, a key roadblock to a bill that would make it easier for child sex abuse victims to seek justice, has ties to a law firm that represents a Long Island Catholic diocese that vehemently opposes statute of limitations reform, the Daily News has learned.

The firm on its website lists as one of its clients the Diocese of Rockville Centre. A grand jury in 2003 accused the diocese, which has parishes in Nassau and Suffolk counties, of protecting pedophile priests.

And firm partner Anthony Curto has served on the board of directors for Telecare, the diocese’s Long Island-based television and production facility.

Though Flanagan left the firm shortly before becoming Senate majority leader in May 2015, a lawyer who represents abuse victims says Flanagan has a conflict when it comes to the Child Victims Act. “It’s a real matter of conscience whether or not he feels he can deprive these victims of terrible sexual abuse of their day in court with his old firm having represented the diocese,” said attorney Michael Dowd.

Flanagan spokesman Scott Reif said the majority leader was unaware his old firm represented the Diocese of Rockville Centre until asked about it by The News on Tuesday.

“The insinuation that he’s holding up the bill because of it is absolutely untrue,” Reif said, adding that “every issue is considered on the merits.”

In describing the work he did in the filing, Flanagan said he provided direct services to clients in the areas of real estate and land use. He also reported that he referred corporate, trust and estate matters to the firm while also providing it with advice related to wills.

Flanagan served in the Assembly for 16 years before being elected to the state Senate in 2002.

Dowd, who has an ongoing priest abuse case against the Diocese of Rockville Centre, said it doesn’t matter that Flanagan is no longer at the firm or may not have handled cases involving the church.

“The fact that they represented the diocese when he was there is a conflict,” Dowd said. “There is nothing more fundamental to the diocese than keeping the money in their pocket.”

Representatives of Flanagan’s old firm and the diocese did not return calls for comment. 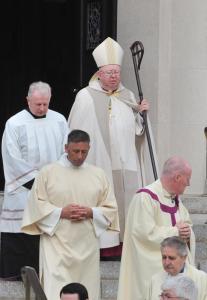 Diocese Bishop William Murphy has been a loud opponent of a measure that would extend or eliminate the statute of limitations pertaining to child sex abuse cases while also opening up a one-year window for those who can no longer sue under current law to bring civil cases.

Murphy had been linked to the widespread priest abuse coverups in Boston, where he worked as a high-ranking priest. He has denied protecting pedophile priests.

He began his time at the Diocese of Rockville Centre in 2001. Two years later, the diocese was hit with a bombshell report from a Suffolk County grand jury that found “the history of the Diocese of Rockville Centre demonstrates that as an institution they are incapable of properly handling issues relating to the sexual abuse of children by priests.”

Around 2004, the diocese acknowledged knowing that 66 of its priests were accused of abusing children, according to Channel 4 New York. It never made those priests’ names public.

With 10 session days left until the scheduled end of the June 16 legislative calendar, time is running short to address the Children’s Victims Act.

In a statement to The News last week, Flanagan for the first time said there are bills addressing child sex abuse issues that he is prepared to support. None are believed to contain the one-year window sought by advocates that allows adults who were abused as kids but can no longer sue under current law to bring a civil case.

The Senate Republicans on Monday blocked a push by Democrats to force a vote on a bill by Sen. Brad Hoylman (D-Manhattan) that would eliminate the criminal and civil statute of limitations pertaining to child sex abuse cases, create the one-year window and treat public and private entities the same when it comes to abuse cases.

Meanwhile, Assembly Speaker Carl Heastie (D-Bronx) has not said whether his Democratic conference will bring any bill addressing the child sex abuse issue to the floor for a vote before the end of the legislative session.

Statement by David Clohessy of St. Louis, Director of SNAP, the Survivors Network of those Abused by Priests (314 566 9790, SNAPclohessy@aol.com, davidgclohessy@gmail.com)

A new civil lawsuit charges that Rockville Centre Bishop William Murphy is keeping a priest on the job in a parish despite a credible report that the priest sexually assaulted a girl. 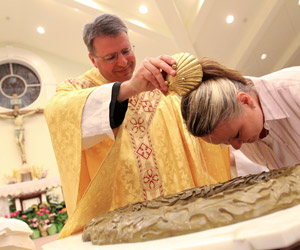 Father Gregory Yacyshyn now works at St. Jude in Mastic Beach on Long Island. He was apparently never suspended after a young woman told top Catholic officials that Fr. Yacyshyn had sexually violated her. That’s a violation of local and national church abuse policies and repeated pledges by bishops to put the safety of kids first and promptly suspend accused predator priests while investigations are done.

The alleged crimes happened at St. Francis Assisi Parish in Greenlawn.  Bishop Murphy, it should be noted, was a long-time close aide and advisor to Boston’s disgraced Cardinal Bernard Law.

Bishop Murphy’s public relations staff will no doubt claim that they were allegedly unable to “substantiate” the girl’s report. Catholic officials say this often. But if they would honor their policies about being “transparent” in clergy sex cases and publicly disclose allegations against priests, many more such charges would be deemed “substantiated.”

In other words, bishops like Murphy want to have their cake and eat it too: be secretive about abuse reports, and then tell accusers “we can’t corroborate your allegation.”

We hope every single person who may have seen, suspected or suffered child sex crimes by Fr. Yacyshyn – or cover ups by Bishop Murphy – will find the courage to call police, expose wrongdoers, deter deceit, protect kids and start healing.

(SNAP, the Survivors Network of those Abused by Priests, is the world’s oldest and largest support group for clergy abuse victims. We were founded in 1988 and have more than 20,000 members. Despite the word “priest” in our title, we have members who were molested by religious figures of all denominations, including nuns, rabbis, bishops, and Protestant ministers. Our website is SNAPnetwork.org)