If a fast food chain with retail stores across the country had employees that consistently raped, sodomized and molested children, wouldn’t you as a legislator vote to shut that chain down in a heartbeat? As a public servant it would be your sworn duty. Why then hesitation over the Catholic Church? Is it because the specter of religious persecution hangs over the outcome? The purpose of revising the Statute of Limitations Laws is neither to target Roman Catholicism nor any other religion. The purpose is to protect children.

The Catholic Church has played the religious persecution card in the United States for too many years. When the Clergy Abuse Crisis hit its flashpoint in 2002, the churches well-paid PR firms spun it out as church bashing. The preponderance of subsequent evidence showed the charges were not only true, but that there also existed a systemic church-wide policy of covering sexual abuse up. Fifteen years later, you have to look no farther than either Philadelphia or the Altoona-Johnstown diocese to understand the institutional policy of the RCC. The RCC has no incentive to release the shameful atrocities committed by their priests against children. The opportunity you have in front of you is to break that policy. 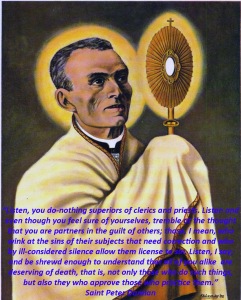 As the Statute of Limitations is up for review, in yet another state spurred by clerical abuse, the church is once again crying foul. What is foul is children being raped, sodomized and molested without fear of recrimination. It is heinous not foul! Jesus reserved his strongest language for two groups: those that would harm children and hypocrites. The Ecumenical Council of Elvira which convened in 312AD contains the first written penalties to be applied to priests who sexually abused children. In the Eleventh Century, St. Peter Damian wrote “The Book of Gomorrah” dealing with the out of control pedophilia and pederasty in the priesthood. The Roman Catholic Church has a well-documented historical record of priests abusing children that goes back seventeen-hundred-years and it is up to you to help put an end to it.

You will not put the church out of business; they’ve been around for 2,000 years. A 2012 article from the Economist estimates that the church in the United States receives 13 billion dollars a year just in tax free pew donations. They’re also the largest single property owner in the United States so they’re not going out of business anytime soon. The Los Angeles Archdiocese paid out half a billion in clergy abuse settlements while at the same time building a 300 million dollar cathedral and it’s still thriving. Please don’t buy into their “poor me” nonsense.

Lastly, don’t let them make you complicit in their criminal enterprise. The only way to end this despicable criminal activity is to hold them accountable. Any person who holds himself a good Catholic or a good Christian knows that the hierarchy of the Catholic Church, in cases of child abuse, is acting contrary to God’s Law, their own Canon Law and Civil Law. Any campaign money derived from the Catholic Church to prevent the Statute of Limitations from being revised is blood money stained with the blood of thousands of survivors of clerical abuse who are left with no redress to right the egregious wrongs done to them. Money is all the church has to offer because they can no longer deliver a voting bloc. Evidence the dismal failure of the concerted all-out bishop’s effort in 2012 to defeat Obama. They failed miserably. Why, because they are paper tigers incapable of delivering their own sermons.

The trauma of child abuse is devastating. The human mind does not process abuse for years and if the victim doesn’t commit suicide prior to coming to grips with it, the tragedy is compounded when he or she realizes they have no recourse because of antiquated SOL laws. Please vote to pass the revised Statute of Limitations Bill. By doing so, you are voting for both the protection and future of our children.
Sincerely

Brother Stephen Baker died last month shortly after it was revealed he had paid financial settlements to 11 men who claimed he had abused them when they were schoolboys.

TOLEDO, Ohio — About 50 more people have come forward to say they were sexually abused at Catholic schools in Pennsylvania and Ohio by a Franciscan brother who killed himself in January, said an attorney who settled 11 alleged abuse cases against the friar.

Brother Stephen Baker, 62, stabbed himself in the heart at a western Pennsylvania monastery on Jan. 26, a little over a week after the disclosure of financial settlements in alleged abuse cases in Warren, Ohio. A coroner told the Altoona Mirror newspaper that Baker left a short note apologizing for his actions.

The new accusers have alleged in recent weeks that they were abused between 1982 and 2007, attorney Mitchell Garabedian said Sunday. Some said Baker abused them even after he left teaching in 2000 when he would attend school events in Johnstown, Pennsylvania, Garabedian said.

The latest allegations come from people in 12 states who went to school in Warren or were either middle school or high school students in Johnstown, where Baker taught and coached, Garabedian said.

The Boston attorney said he’s also heard from four people who say they were abused while Baker was at a high school in Orchard Lake, Michigan.

Baker was named in legal settlements in January involving 11 men who alleged he had sexually abused them at a Catholic high school in northeast Ohio three decades ago. The undisclosed financial settlements involved his contact with students at John F. Kennedy High School in Warren from 1986 to 1990.

Roman Catholic Bishop George Murry of Youngstown said this month that he sent letters asking for information from about 1,200 adults who attended Kennedy High School while Baker taught and coached there.

The Youngstown diocese has said it was unaware of the allegations until nearly 20 years after the alleged abuse.

Messages seeking comment were left with the Youngstown diocese and the Altoona-Johnstown Diocese on Sunday.

By Ron Todt, The Associated Press

Brother Stephen Baker, 62, was found dead of self-inflicted wounds at the St. Bernardine Monastery in Hollidaysburg on Saturday morning, Blair Township Police Chief Roger White told The Associated Press. He declined to specify the type of wounds or say whether a note was found.

Baker was named in legal settlements last week involving 11 men who alleged that he sexually abused them at a Catholic high school in northeast Ohio three decades ago. The undisclosed financial settlements announced Jan. 16 involved his contact with students at John F. Kennedy High School in Warren, Ohio from 1986 to 1990.

The Youngstown diocese previously said it was unaware of the allegations until nearly 20 years after the alleged abuse.

“Let us continue to pray for all victims of abuse, for Brother Baker’s family and the repose of his soul,” Youngstown Bishop George Murray said in a statement Saturday.

After the settlements were announced, the Altoona-Johnstown Diocese in central Pennsylvania said it received complaints in 2011 of possible abuse by Baker at Bishop McCort High School in Johnstown, about 60 miles east of Pittsburgh.

Bishop McCort High School hired an attorney to investigate after several former students alleged they were molested by Baker in the 1990s. Attorney Susan Williams said three former students had talked to her in detail about the alleged abuse.

Bishop Mark Bartchak of the Altoona-Johnstown Diocese said in a statement that he was saddened by the news of Baker’s death, but declined further comment citing pending legal action involving the diocese.

A message left for Father Patrick Quinn, the head of Baker’s order, the Third Order Regular Franciscans, was not immediately returned.

Judy Jones, assistant Midwest director of the Survivors Network of those Abused by Priests, said the organization still hopes people who know about other abuse allegations against Baker will continue to come forward.

“We feel sad for Br. Baker’s family but even sadder for the dozens of boys who Baker assaulted,” she said in a statement.