For an abusive priest, retirement income came with a premium

For an abusive priest, retirement income came with a premium 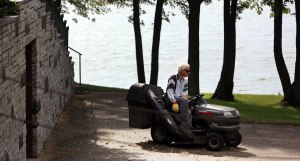 The Rev. Robert Kapoun now lives in Cold Spring, Minn., about 18 miles southwest of St. Cloud. The lakefront property he occupies more than half the year was once owned by his parents — and is allegedly the scene of one of Kapoun’s many instances of abuse against minors under his ministerial care in the 1970s and ’80s. (MPR Photo/Jeffrey Thompson)

For decades, the Rev. Robert Kapoun charmed parishioners with his accordion at “polka masses” across Minnesota. Privately, he took young boys to saunas, rectories and a secluded cabin in Cold Spring and sexually assaulted them, according to court testimony. Parents complained but leaders at the Archdiocese of St. Paul and Minneapolis did little to stop him.

Kapoun remained in ministry until 1996, the year a lawsuit brought by Dale Scheffler, one of his victims, went to trial. It was the biggest clergy sex abuse case in Minnesota history. Over 10 days in a packed Hennepin County courtroom, jurors watched in shock as a parade of top church leaders defended and minimized their inaction. Former Archbishop John Roach claimed memory loss, while Kapoun, then 57, claimed that God had cured him of his sexual interest in young boys.

The jury awarded a $1 million verdict. Scheffler broke down sobbing.

It was a short-lived victory. An appellate court overturned the verdict the following year due to the statute of limitations. All Scheffler got was a bill from the archdiocese for its legal expenses.

An MPR News investigation found that a year after the trial, the archdiocese allowed Kapoun to retire early and sent him funds beyond his pension pay that totaled about $160,000 by 2012. The money was classified as “medical retirement.” Those retirement payments — $957.50 every month — came in addition to regular pension checks of $1,510.50.

In an interview recently with MPR News, Kapoun dismissed questions about money. The priest said that he rarely sees anyone from the archdiocese and that he suffers from migraines and spinal pain. He splits his time between his half-million dollar lakefront property in Cold Spring and a second home in Florida. “I’m very happy,” said Kapoun, 74.

A spokesperson for the archdiocese declined to make anyone available to discuss Kapoun.

Kapoun is one of several accused priests who’ve received payments in addition to regular pension checks, according to two former top church officials.