← Sex crimes and the Vatican
Natures Healing Touch Part I →

Both Sides Point To Key Evidence In Priest Abuse Case

This story comes from the following link: http://philadelphia.cbslocal.com/2012/03/28/both-sides-point-to-key-evidence-in-priest-abuse-case/

Both Sides Point To Key Evidence In Priest Abuse Case

PHILADELPHIA (CBS) – Smoking gun evidence for the prosecution and the defense as both sides cite the same couple of documents to make their case for guilt or innocence in the clergy abuse case. The evidence centers around a former co-defendant who last week admitted sexually abusing an altar boy.

The prosecution has presented evidence in the form of documents showing Monsignor William Lynn, who is charged with endangering children compiled a list of 35 suspected or admitted predator priests, found then Father Edward Avery was guilty of sexual misconduct with a minor but still allowed him to remain in ministry and Avery struck again.

He pleaded guilty to this assault last week.

But the defense says the list is evidence Monsignor Lynn did his job, tried to deal with the sex abuse issue but his list was later ordered shredded by the late Cardinal Anthony Bevilacqua and the shredding was carried out by others, the act memorialized in a memo shown to the jury. 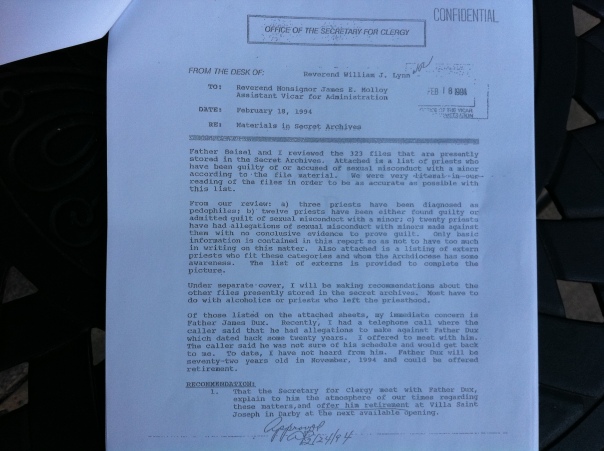 ← Sex crimes and the Vatican
Natures Healing Touch Part I →